On 17th May 2022, Hon. Justice Odunga of the Machakos High Court ruled that the mandatory minimum sentences provided by the Sexual Offences Act for sexual offences are unconstitutional and that they limit the discretion of the court to determine the appropriate sentence to impose. Consequently, various courts across Kenya are now faced with an overwhelming number of applications for resentencing by prisoners previously convicted of sexual offences. This precedent claws back on the gains made by women rights movements over the years to ensure that gender-based violence is treated with the urgency and weight it deserves.

We congratulate the newly elected governors for breaking the barriers and shattering the glass ceiling. This is an indication that Kenyans are making a shift from the patriarchal underpinnings that have long undermined prospects of women’s leadership in social, economic and political spaces. 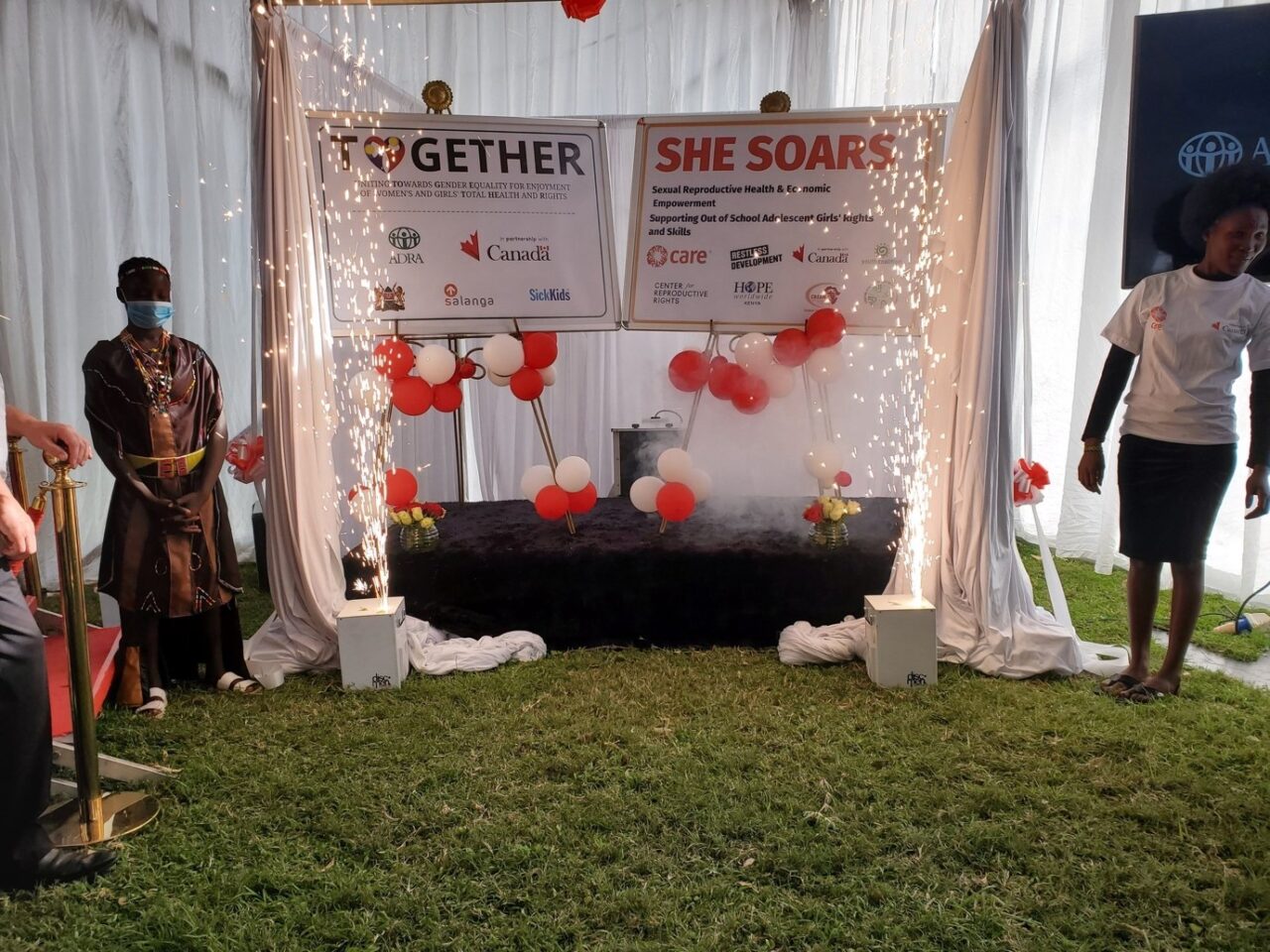 CREAW is proud to be a strategic partner in the SHE SOARS (Sexual and reproductive Health & Economic empowerment Supporting Out of school Adolescent girls’ Rights and Skills) program in Dagoretti North and Westlands subcounty. 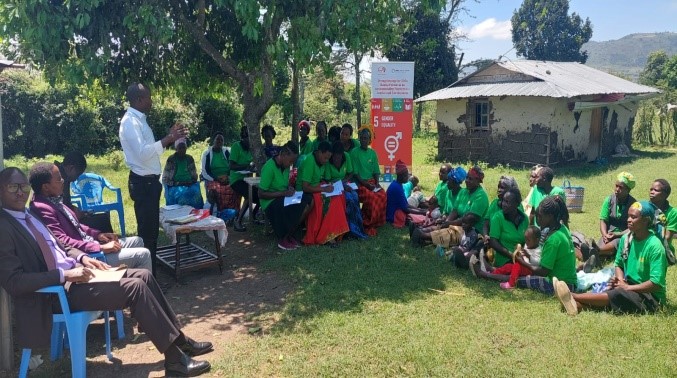 Women’s economic rights and opportunities in Bomet as it is in many other counties is undermined by many factors. Social & economic barriers, including retrogressive social and cultural norms, lack of access to capital & credit facilities, and limited economic empowerment programs for women, are some of the vices that discourage women from practicing key entrepreneurial behaviors like competitiveness.

The Centre for Rights, Education and Awareness was on Tuesday, 14 June, recognized by the Gender Is My Agenda Campaign Network with the Civil Society Award at the State House. 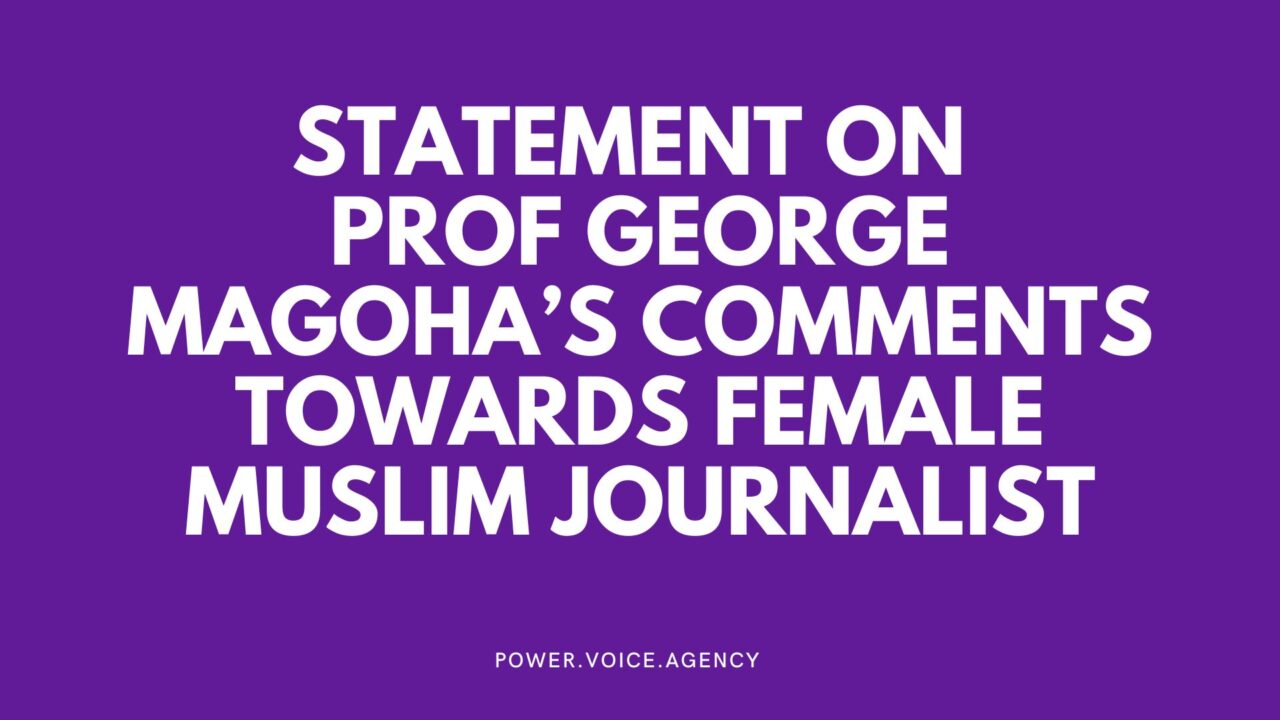 We take great exception to the comments made by the Education Cabinet Secretary Prof George Magoha towards a female Muslim journalist on the 26th July 2022. While addressing a press conference, Magoha zeroed in on the female journalist asking, “who are you representing? If you are representing Al Shabaab, I will not answer you.” 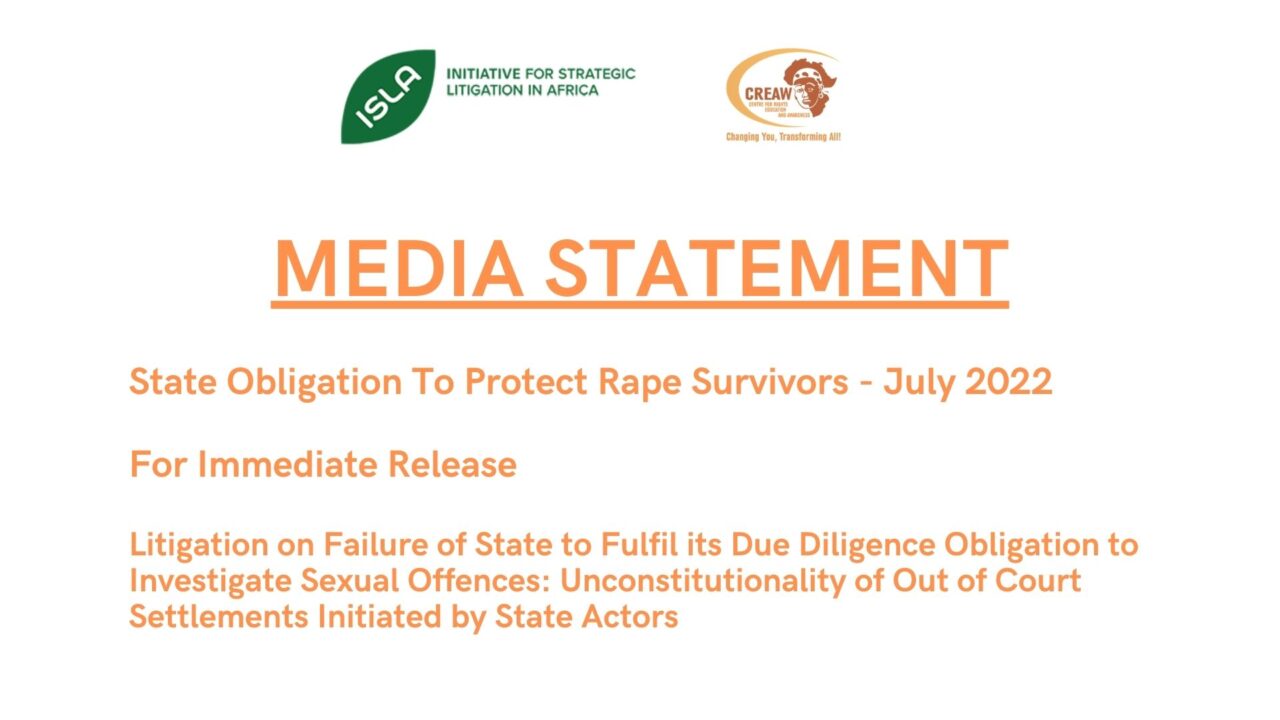 For Immediate ReleaseLitigation on Failure of State to Fulfil its Due Diligence Obligation to Investigate Sexual Offences: Unconstitutionality of Out of Court Settlements Initiated by State ActorsNairobi, KenyaYesterday, 5th July 2022, the Centre for Rights Education & Awareness (CREAW) and IW, a rape  survivor, appeared before  the Constitutional and Human Rights Division of the High Court of Kenya, HCCHR PET E416/2021 – IW & Centre for Rights Education & Awareness (CREAW) vs the Attorney General, Inspector General of Police and others. The complainants seek to hold the state accountable for the failure to fulfil its obligations to investigate, prosecute and punish perpetrators of violence against women. In particular, this case seeks to address a common but understated challenge in the criminal justice system where survivors of sexual violence are not adequately supported by state agents but coerced into entering into settlement agreements with perpetrators. This case seeks to create a wider social impact in the criminal justice system in Kenya where out of court settlements in cases of gender- based violence are rampant. Of specific concern is the role that State actors such as the police play in propagating these out of court settlements which empower perpetrators of violence and leave the victim/survivor grappling with the aftermath of the violence. This creates a culture of rape and impunity in the society. In our submissions, we set out the core components of an effective investigation and standards the role of the police in protecting victims of violence in the criminal justice system.  We submitted that the investigation by the police in this case did not meet the threshold for a proper investigation.  In response to the Attorney General’s argument that the Inspector General of Police cannot be held liable for the actions of the investigating officer, we argued that the Inspector General of Police can be held accountable for the actions of the police officers who act in their capacity as a police officer and employees of the National Police Service.The judgment will be issued on 17th November 2022 before Hon. Justice Mrima.

The applicants were represented by Winfred Odali who is an alumni of ISLA’s Feminist Litigation Network. The Initiative for Strategic Litigation in Africa (ISLA) is acting as advisor to counsel. ISLA’s Feminist Litigation Network (FLN) aims to develop a pool of African feminist strategic litigators. ISLA achieves this by investing in partner organisations and a raft of capacity strengthening activities such as the strategic litigation institute. She works as a Strategic Litigation Advocate in CREAW where she is steadily developing a portfolio of cases to hold the state accountable for the failure to protect women from violence, among others. This was her maiden appearance before the Constitutional Division.Join the conversation on social media by following:#EndImpunityforVAW#EndVAW For further enquiries kindly contact:Sibongile NdasheISLA Acting Litigation Director[email protected]
Winfred OdaliCREAW Strategic Litigation Advocate[email protected] 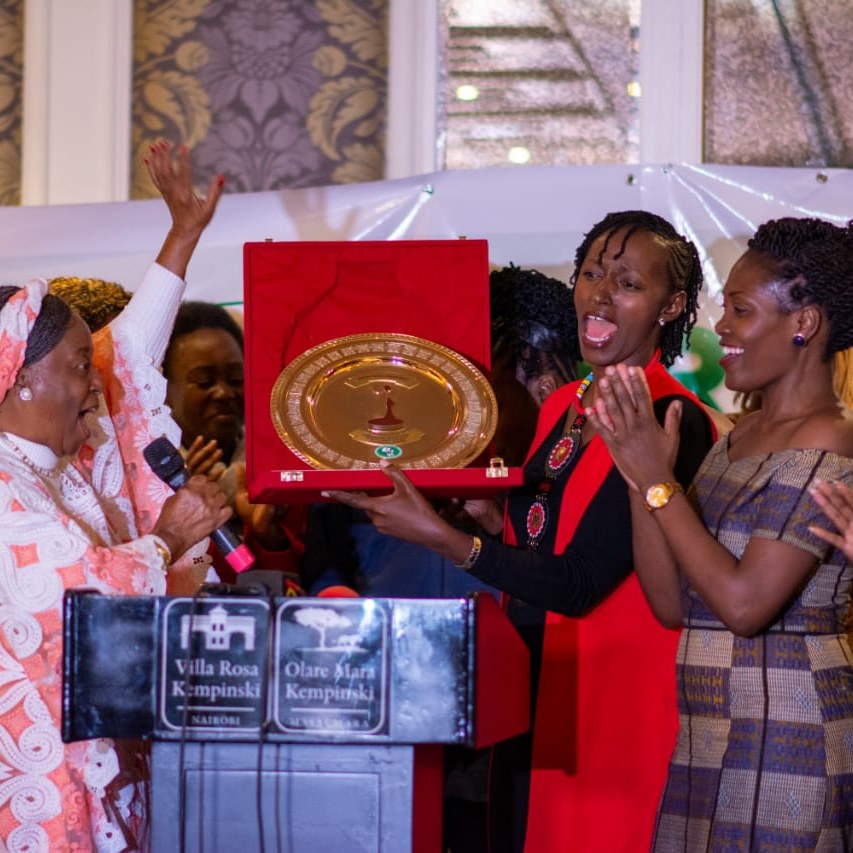 Civil Society Organisations recognized for their efforts in gender quality

The Centre for Rights, Education and Awareness was on Tuesday, 14 June, recognized by the Gender Is My Agenda Campaign Network with the Civil Society Award at the State House. This award was a recognition for the work of civil society organisations towards gender equality and development. It was one of the awards complementing the Africa Gender Award 2022, that was presented to H.E President Uhuru Kenyatta on the same day. Also awarded was the Kenya Private Sector Alliance which received the Private Sector Award.

The award serves as a mechanism to monitor and reward an African Head of State or Government who has demonstrated outstanding achievement in promoting gender equality and development within the thematic areas of the African Union’s Solemn Declaration on Gender Equality. Kenya has achieved eleven out of twelve operative articles of the Solemn Declaration on Gender Equality in Africa. The award is based on three thematic indices namely HIV Index, Education Index and Gender Parity Index.

HE President Uhuru acknowledged that it took a multi sectoral collaboration with the civil societies and the private sector to achieve the gains that Kenya has had over the past one year.

“CREAW would not have been able to do our work were it not for the enabling environment created by Cabinet Secretary Prof Margaret Kobia which has opened doors for the civil society to work with the government,” Executive Director of CREAW Wangechi Wachira stated.

To advance gender equality and effectively influence policy change, CREAW continues to work collaboratively with both state and non-state actors. In working with the government , CREAW is a member of the National Advisory Committee on Generation Equality Forum to promote accountability to the bold commitments made. CREAW is also a member of the National Steering committee of Policare to ensure the actualization of the integrated response to Gender based violence (GBV). At the judiciary, CREAW is a member of the National Council on the Administration of Justice working committee set to review the Sexual Offences Act and other related GBV laws to enhance access to justice. Additionally, CREAW works collaboratively with Parliament through KEWOPA on legislative work. At the county level, CREAW is a member of various  Gender Sector Working Groups  and Court Users Committee in more than 10 counties.

About the Centre for Rights Education and Awareness

CREAW envisions a just society where women and girls enjoy full rights and live in dignity. We believe in the equality of rights, with empowerment and justice made available for every woman and girl. We stand for, ensuring women and girls have Power, Voice and Agency. For more information on CREAW, please visit: www.creawkenya.org. 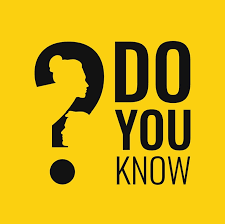 In light of the changes in the work environment and statutory structures in the country (Kenya), we thought of bringing the below FACTS to your attention, in our favourite HR segment titled Le Savies Vous 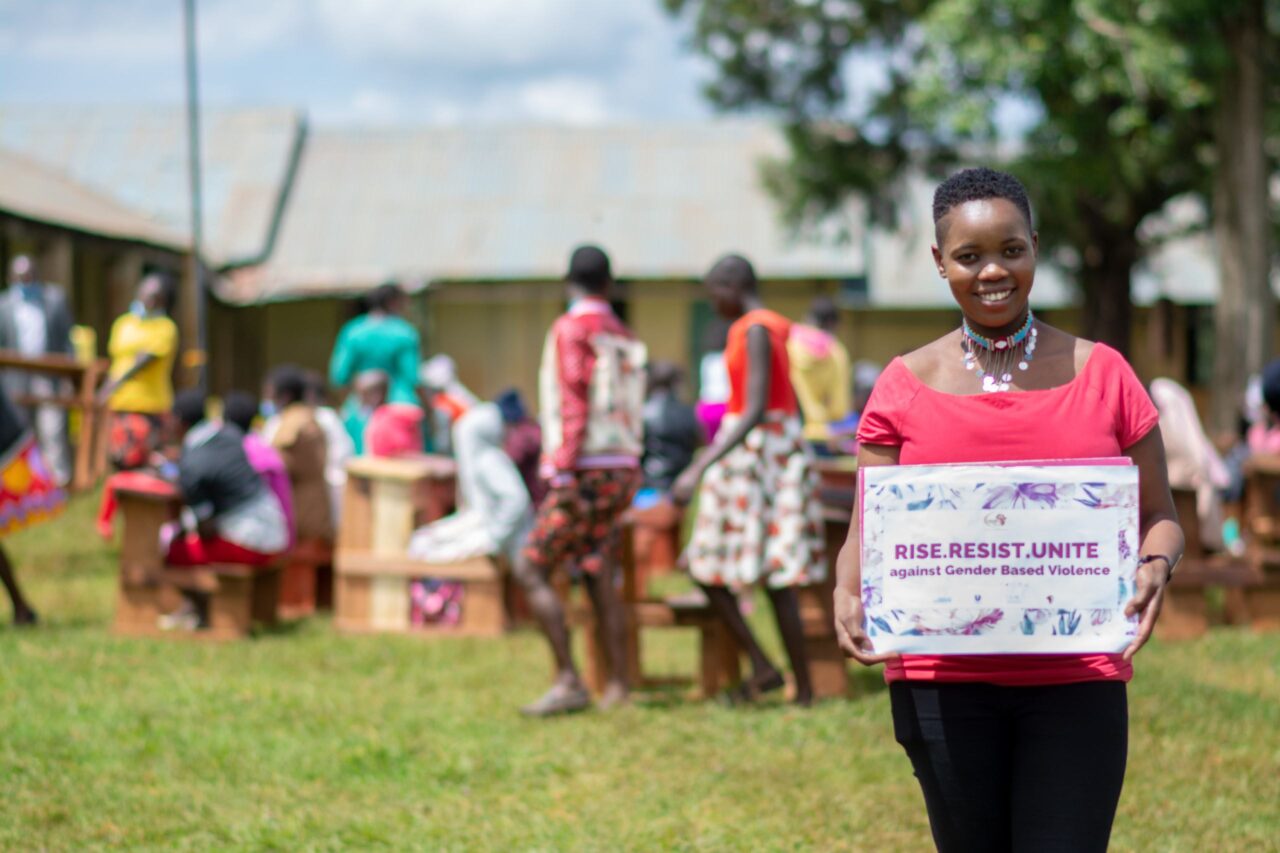 In Kenya, women’s groups movement emerged in the pre-independence era which scaled up in the wake of independence in response to the development aspirations targeting illiteracy, poverty and disease burden. However, as years go by, more and more emerging issues affecting communities have continually been spotlighted by women groups. From political exclusion, gender bias, violence against women and girls as well as social injustices.

It is to this end that the Women’s Voice and Leadership (WVL) program supported by Global Affairs Canada through CARE Kenya is implementing a project to support the capacity and activities of local and national women-led organisations seeking to increase enjoyment of human rights and gender equality by women and girls in Kenya.

To achieve this, the project is providing funding to the grass-root women rights organisations and networks, in recognition of the funding gaps they face. Amongst the many gaps they needed to fill, Human Resource was identified as a capacity building area of need. Having noted that human resource department is the heart and soul of any organisation, we embarked on capacity building trainings to help the women rights organisations get to speed with the basics of the department needs.

The sessions are still ongoing with several physical and virtual trainings for the group’s in Bomet, Kericho, Nanyuki, Mombasa, Kilifi and Nairobi counties. It is key to note that without proper human resources management the women led organisations would have had a hard time working effectively to achieve their institutional objectives.