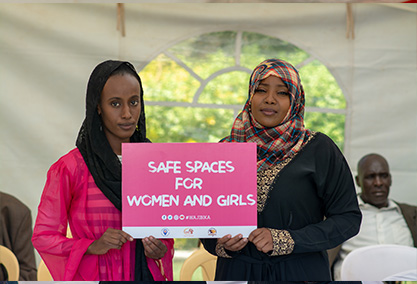 Violence against Women and Girls (VAWG) is among the most oppressive forms of gender inequality and a fundamental barrier to equal participation of women in social, economic and political spheres. According to UN Women the best way of addressing VAWG is to prevent it from happening in the first place.

Through its access to justice program, CREAW is engaged with law and policy makers at National and County levels to inform or champion the development and implementation of regulatory frameworks concerning SGBV. To exemplify, CREAW undertook advocacy initiatives and offered technical expertise that contributed to the passage of the Sexual Offences Act 2006, Matrimonial Property Act 2013, the Marriage Act 2014 and the Protection against Domestic Violence Act 2015. Additionally, CREAW supported the County governments of Kilifi and Meru, the Kenya Police Service and the Kenya Judiciary to strengthen their mechanisms of implementing existing GBV laws and policies and reporting on the progress so far made.

In 2010, CREAW partnered with the Teachers Service Commisison (TSC)in the development of the TSC circular 3 of 2010 which outlaws teacher student sexual violation and describes administrative steps to ensure a safe learning enviornment in schools. Furthermore, CREAW in partnership with Georgetown University has been supporting the TSC to further strenghten its Code of Regulation and Code of Conduct for teachers.

CREAW has applied the SASA Approach!3 and Artivism4 to succesfully spark community-driven dialogue and actions towards preventing and responding to GBV. This has resulted in increasing community intolerance to GBV and to the practises that perpetuate it, as well as improved reporting of GBV cases.

CREAW has reached over 30,000 community members in Kibera with these approaches, resulting in 16,000 GBV cases being reported to date.

Concerning citizen engagement, CREAW has over the years invested in strenghtening the capacity of women-led groups to undertake GBV advocacy. Specifically, CREAW uses Genderthon, a sports and fitness event, to mobilize citizens, public and private sector actors, civil society and media to celebrate gender equality and discuss ways of preventing and responding to GBV. These have seen Counties such as Kilifi, Meru and Narok develop county specific gender policies.

On GBV response, CREAW has over the years provided free legal aid and psychosocial support to over 16,000 survivors of GBV in Kibera, and is among the few CSOs that offer these services. The support is offered in close partnership with State-sponsored legal aid programs such as the National Legal Aid Service. To ensure integrated, efficient and timely GBV service delivery, CREAW has fostered strategic partnerships with various GBV actors. These include the NGEC, various GBV working groups, Court User Commitees, relevant health institutions, criminal justice system actors and community Alternative Dispute Resolution (ADR) mechanisms.