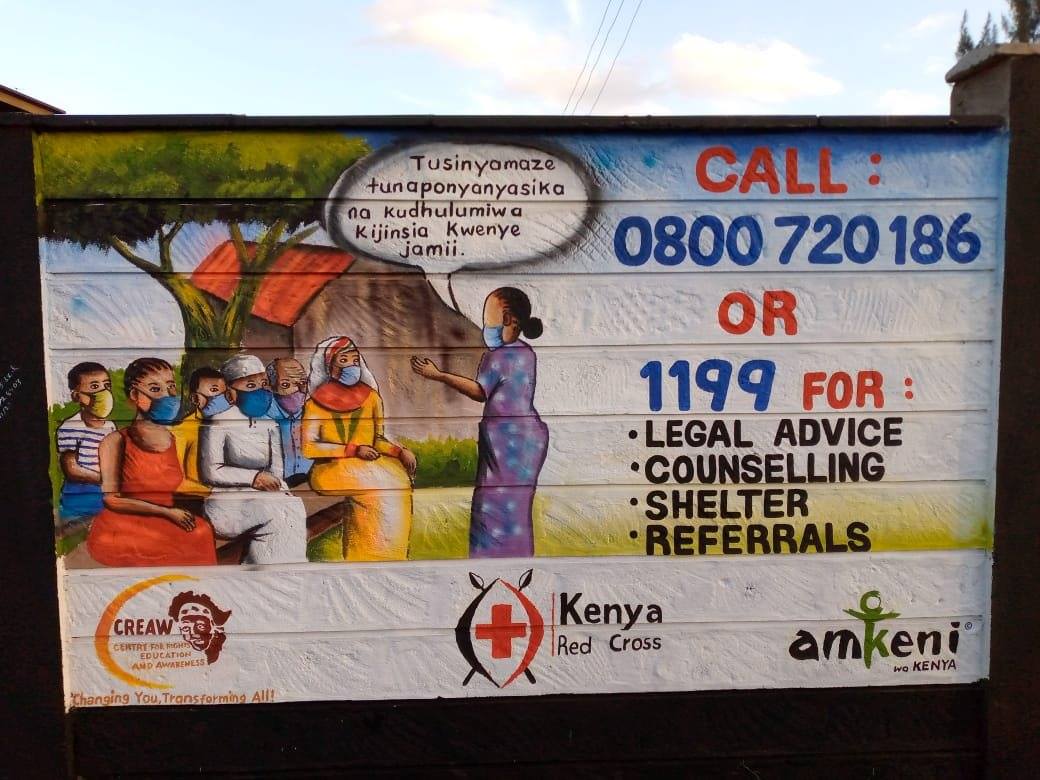 In the wake of the Covid-19 pandemic, government enforced social distancing restrictions among them the stay at home order in a bid to suppress transmission of the Coronavirus and keep people healthy, but for many women and girls home became a ‘danger zone’ as they were forced to be in the ‘lockdown’ with their abusive spouses, partners and family members and cut off from supportive network and resources that could help them.

The ordeal of one evening morning in early July, brings gloomy memories to 38 year old *Nafula (not her real name). Her husband of three years had turned against her; what started as verbal insults progressed real quick into physical leaving her bruised.

“It was not the first time that he was abusive to me. At one point he hired goons to beat me up,” recounts Nafula.

Nafula’s own abusive experiences form part of the statistics of countless women and girls whose lives have been affected by the wave of gender based violence during the pandemic. In December 2020, a report by the National Crime Research Center indicated that incidences of gender based violence had increased by 92 percent in the period of January and June compared to that of January and December in 2019, with murder, sexual offences, defilement, grievous harm, physical abuse, child neglect and child marriages taking the larger chunk of cases.

Similarly, the Center for Rights Education and Awareness (CREAW) has received increased cases of women and girls reporting violations. On average, CREAW would received 20 cases in a month, with the Covid-19 pandemic, the numbers have spiked to 34 cases necessitated by the social and economic effects of COVID-19 on women and girls. Consequently, the demand for legal and counselling support was on the rise.

Amidst the surge, CREAW rolled out a 24 hour hotline-0800-720-186 to help survivors like Nafula to access support services virtually including legal information, counselling, access to safe shelters and referrals to other GBV services. 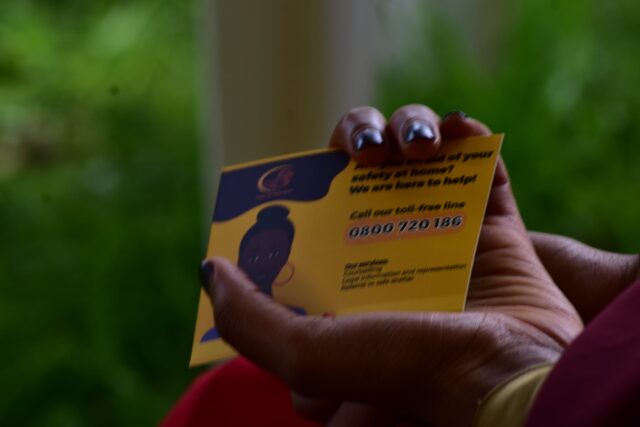 With the support from grassroots community champions and messaging on community radios and social media, CREAW has been able to publicise the hotline that now have over flow of cases reported even from the counties in the outskirts of Nairobi.

“Through the hotline, survivors are able to get timely legal aid services, information and psycho-social support to rebuild their lives,” says Nereah Oderah, the lead Counsellor who supports survivors through the helpline.

With the support from UNDP, CREAW has adapted its interventions to provide free tele-counselling and pro-bono legal services to survivors of gender based violence among them, women and girls who reside in the informal settlements of Nairobi. A total of 597 GBV survivors benefitted from pro-bono legal assistance & advice during the pandemic period. 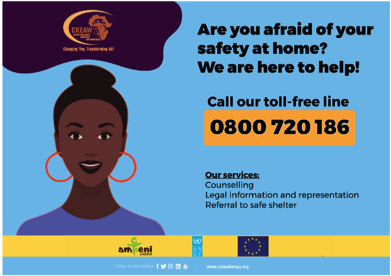 We meet Neema* (not her real name) in the informal settlements of Kawangware where she has been living for six months since her husband of 10 years beat her and threw her out in the cold in the wee hours of the night with her two children.

“For the last 10 years I have been married to him, there has never been peace in our home. Occasionally, we would fight even on the slightest provocation,” she says, adding that everything changed when she lost her job; her husband threw her and her two young children out in the cold, and she was left to fend for her children with no income in sight.

Sadly Neema* is not the only one facing domestic violence: her experience mirrors that of many women and girls who are increasingly being trapped with their abusers at home.

With the raging cases of COVID-19 pushing households into economic slumps, women and girls “locked” with their abusers are also finding it difficult to seek safety away from violence marred homes- cutting them off from their supportive networks and resources that could help them.

Like Neema, Kadija ( not her real name) is also another survivor of domestic violence from the informal settlements of Kibera. It has only been a month since she left the shelter where she had sought refuge after receiving constant abuse from her husband that only worsened during the pandemic.

“I am unemployed and depended on my husband. Because of the pandemic, he received a pay cut and we could barely afford to pay for food and rents. Many times we would fight even over minor things. I feared for my life and that of my children,” says 29-year-old Kadija who is now separated with the husband.

As the pandemic keeps raging on, CREAW’s owned hotline-0800720186 has been a buzz with women and girls making frantic calls to report violations and seek legal and referral services. On average, the hotline receives 90 cases in a month, this compared to 20 cases during the same time last year. Similarly, the rising incidences of violence against women and girls have been further affirmed by the data from the National gender based violence (GBV) hotline 1195, indicating a 55 percent surge with women accounting for nearly 70 percent of those cases.

With the pandemic disrupting access to essential support services to survivors of GBV, CREAW, with the support from UNDP Kenya, adapted its intervention in the community during the pandemic to ensure that women and girls- survivors, especially those living in the informal settlements of Nairobi receive the much needed support to heal and build resilience beyond the pandemic.

This includes, free legal information and representation, psychosocial support to help survivors heal from their traumatic experiences. In-addition, CREAW also integrated the survivors to the existing livelihood cash reliefs intervention supported by the European Union in Kenya and shelter services as they reorganise their lives. 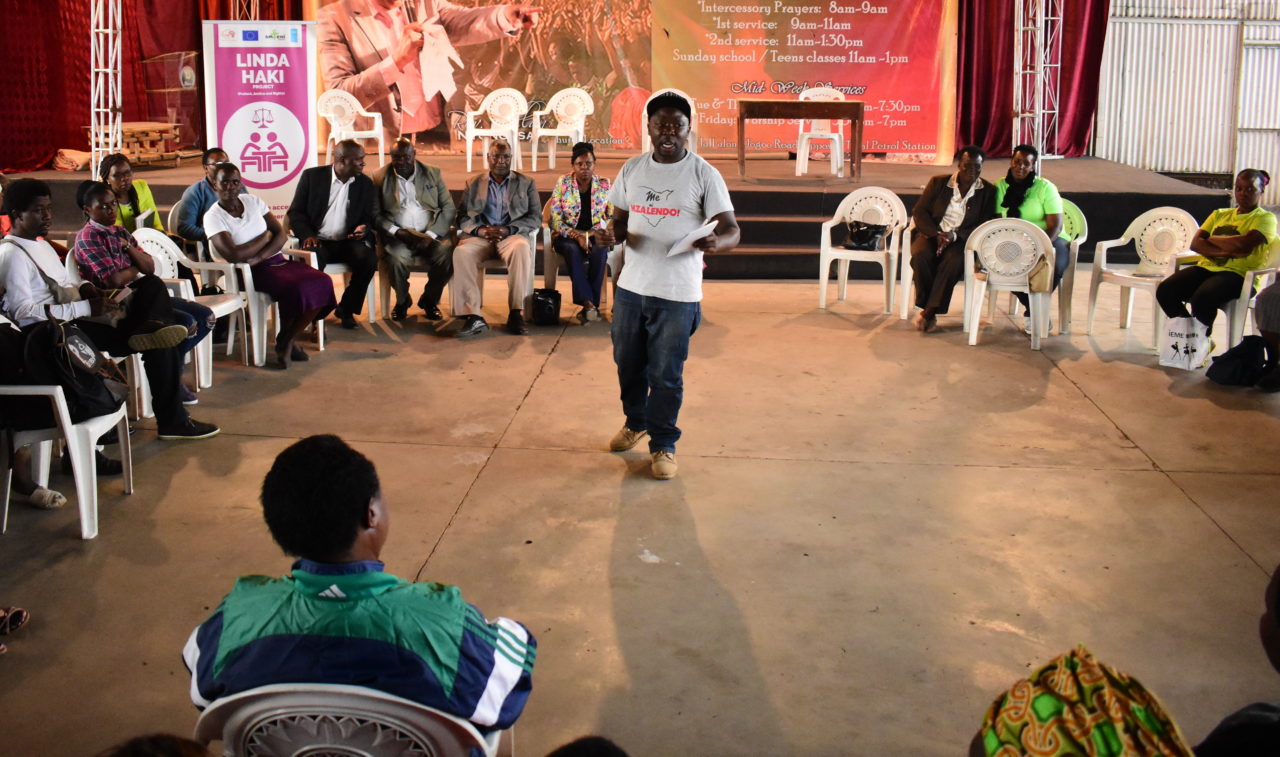 Thursday afternoon, men and women are gathered at the Tom Mboya Hall in Makadara to converse on rather difficult subject that is mostly unspoken in the households, the silence is even louder among the communities.

Tom Mboya Hall is synonymous with community gatherings that called for liberation in the clamour for independence in Kenya. And so, I gather that the ground where we are seated is symbolic enough; from the conversation, freedom calls- it is a day to let free and openly talk about domestic violence and by extension, other forms of gender based violence.

But first, a skit is dramatised…

After awhile, the wife is made aware of the husband’s meanderings and the home turns chaotic with revelations of HIV infections.” –for a minute, a sharp silence follows, the melancholic faces connotes the realities that women and girls are forced to contend with in the various households. 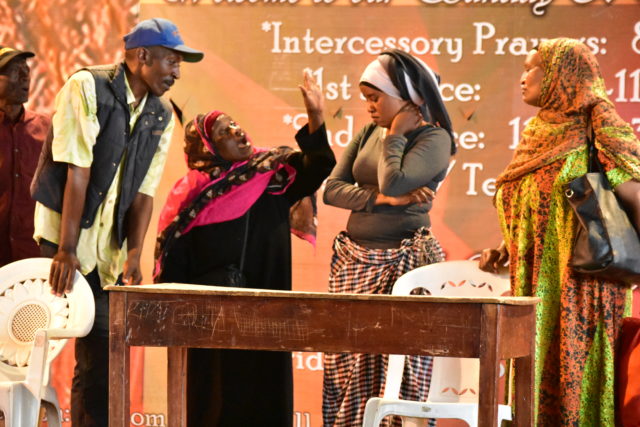 Slowly and slowly, the murmurs transitions into a buzz of discussions. Ken Odaga a Community Champion leads the conversations.

From the conversations, it emerges that silence around gender violence makes women and girls more vulnerable and often compounds their sufferings. Today is a day to break the silence; notes Odaga.

Odaga, a long time resident of Makadara understands that the stigma around gender based violence (GBV) has contributed greatly to survivors not speaking out on their perpetrators and hence they are not able to get justice and heal from the harm done to them.

“In the conversations, we are making communities aware of their rights and the existing GBV related laws. This is a sure way of ensuring communities are involved in actions that addresses the vice,” he says.

Odaga also explains that, the skits makes it easier to communicate what would have otherwise been difficult to talk about given the social norms around issues like intimate partner violence that exists among communities.

The conversations are spearheaded by community champions under the Linda Haki project implemented by CREAW in partnership with the United Nations Development Programs.

The Linda Haki project aims at educating communities on their rights as provided for in the constitution to enable them seek legal redress and stem out gender based violence in Nairobi’s informal settlements of Kibera, Kamukunji and Makadara.

Under the project, Odaga and 60 other community champions were trained on the existing legal frameworks and GBV. From the knowledge, they have taken the initiative locals within their localities.

“Following the dialogues, community members are now opening up and debunking the myths around intimate partner violence and supporting survivors to deal with the violations,” says Odaga.

The community conversations have also instilled a growing interest among community members on the available laws that protects women and girls from gender violence. 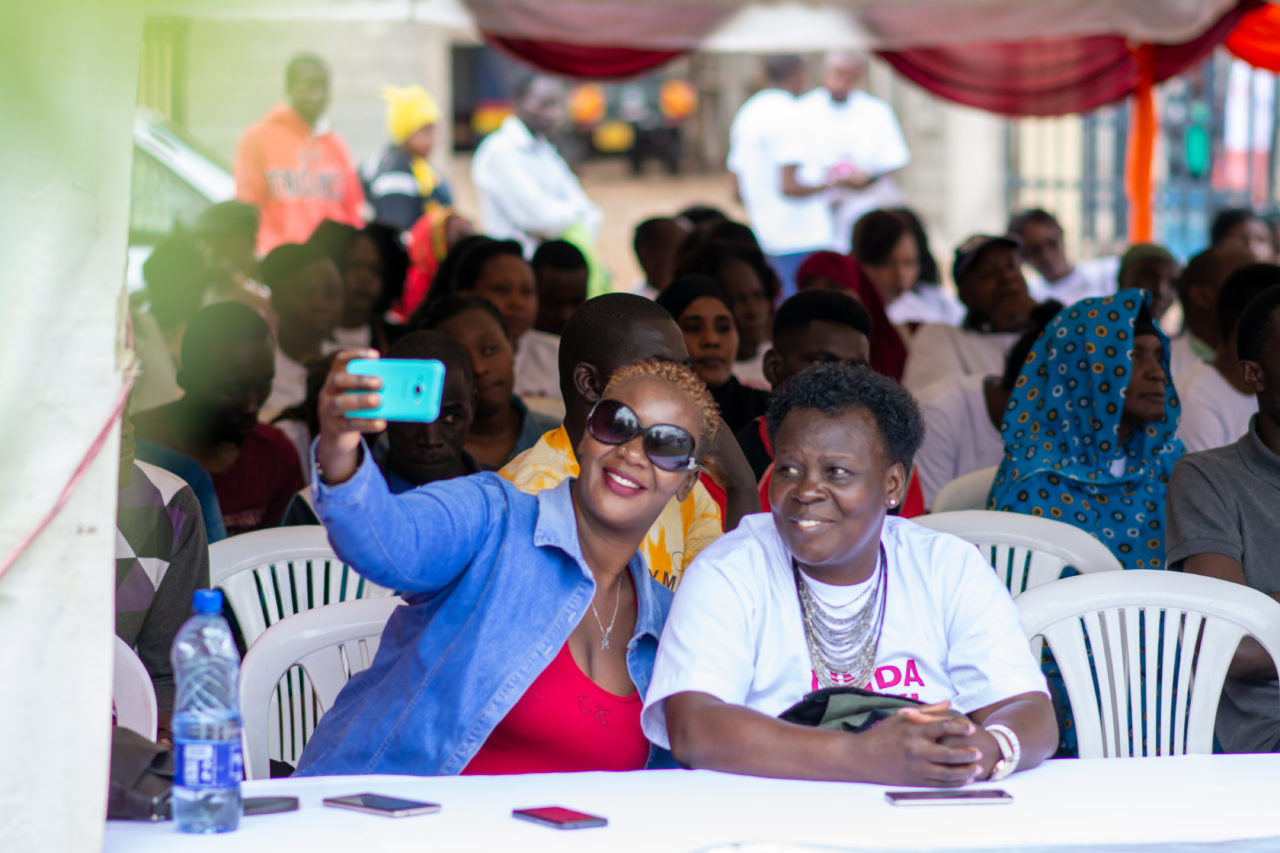 October 3rd 2019 marked a new dawn for the women and girls residing in Nairobi’s informal settlements as the Linda Haki project was launched.

The Linda Haki project implemented by CREAW with the support from the United Nations Development Programs aimed at increasing access to justice and legal aid services for the poor and vulnerable women in the informal settlements of Nairobi.

Speaking during the launch, the Nairobi County Director of Gender, Culture and Social Services Jane Waruguru lauded the efforts to enhance access to legal information, noting that the initiative is timely and will go along way in ensuring that the rights of women and girls are well respected.

“I am happy that the project will bring power to the people and empower them to enhance protection for women and girls in the households and around Nairobi,” said the Director.

She said that the County Government of Nairobi, is concerned about the plight of residence who face challenge in accessing legal information and representation and thus is open to partnerships geared towards helping residents realize their rights.

Echoing in her sentiments was the CREAW’s Director Wangechi Wachira who called on the GBV stakeholders and duty bearers to work together and enhance actions towards eliminating gender based violence in the informal settlements of Nairobi.

The Kamkunji Sub-County Assistant County Commissioner Fred Ndunga reiterated the need to address defilement matters which are sky rocketing in the community. He said, the silence around the matter is worrisome and must be addressed to protect children from repeated attacks.

“I am concerned that some Chiefs conspire to solve defilement cases at familial level. We must stop this,” said Ndunga who also called on the locals to take responsibility and report violations for perpetrators to be held accountable. 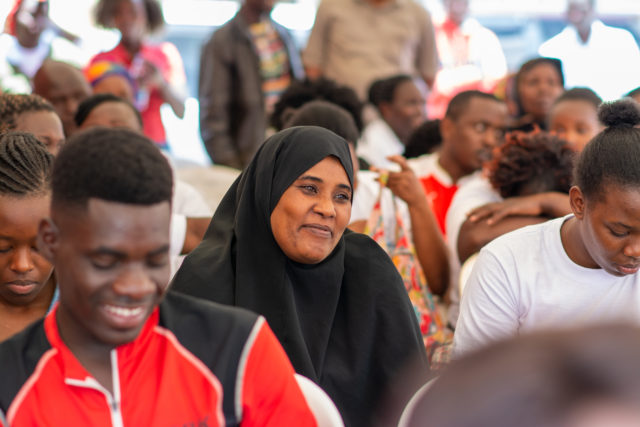